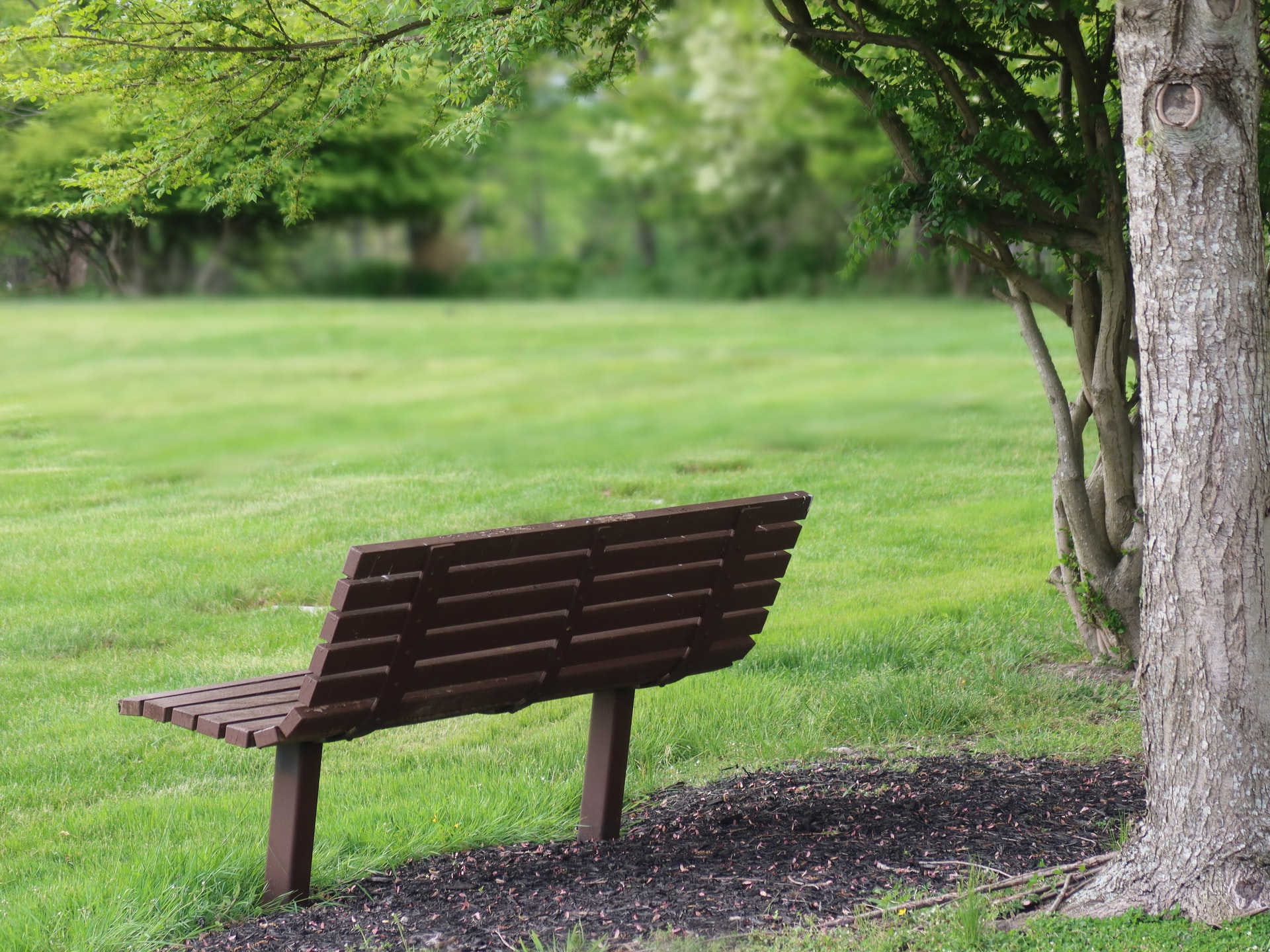 Home > MindWise Blog > How to Grieve With the Best of Them

How to Grieve With the Best of Them

Last month marked the ninth anniversary of my mother’s death. She died suddenly – my family had found out a month earlier that she needed heart surgery, but at her age (62) survival rates were high. Four days after the initial surgery and less than three weeks before my wedding, my mother died on the operating table.

In the years since, I’ve tried to erase that date from my experience (just as hotel elevators often move directly from the twelfth floor to the fourteenth). I do not want to ignore memories of my mother, but I’d prefer to forget her death-anniversary completely.

Despite that preference, I begin to feel the looming weight of the date starting in early May. My ability to focus dwindles, I find myself wanting to lie in bed as much as possible, and a general funk settles over me. I plan for a sucky couple of weeks leading up to the date and brace myself to endure the sucky day itself.

This year when the telltale signs of approaching anniversary began to eat away at my attention span, I decided to reach out to two of my colleagues, experts in traumatic loss: Jim McCauley, co-founder and Associate Director of MindWise’s Trauma Center; and Waheeda Saif, Program Coordinator for the Trauma Center.

Waheeda Saif: It's different for different people – the days leading up to the anniversary for a lot of people can be really, really bad. And then the day-of can be like, “Oh I kind of got through that day. But the days leading up to it, my stomach was in knots, my chest was tight, my head felt like it was going to explode – I wish I hadn't built it up so much.” It's sometimes helpful to take care of that anticipatory anxiety ahead of time. So sometimes I say to folks, why don’t we come up with a plan for the day?

Nick: That makes a lot of sense. I've reached the point now where I know in advance, I clear my schedule. If I have to work on the date, I take it off. I try to build in time for myself. But I'm still caught off guard when I have a hard time.

Jim McCauley: Anticipation is almost always worse than the actual day. We always tell people: experiment. There's no right or wrong way to grieve. Try something. If it works for you, great. If it doesn’t, try something else, no explanation needed, just whatever works for you.

Waheeda: It's so true – you never know how something's going to land. And what works one day or one year might not work the next.

Jim: We always hear the saying that “time heals all wounds” and that's absolutely false. What heals all wounds is meaning-making – you know, making it part of your life is key.

Nick: Rather than just pretending the anniversary’s not happening, I'd be better served by planning some ways to focus on memories of my mom?

Jim: That’s right. When you have a sudden death in the family, it's important to remember how your loved one lived, not how they died. How can I honor this person who was so important in my life? Sharing memories, just sort of talking and thinking about very specific events – the more detail that you can focus on, the more that you can build out that image or story. What was the temperature like? Were there any smells in the air? Was anybody else around? Building out those kinds of memories is going to be incredibly helpful to you in managing your grief and trying to find ways to stay connected to your mother. You're not trying to find closure – there's no such thing as closure.

Nick: Yes! That's an excellent point! My mom's birthday is in March so a lot of these feelings start stirring up then. I try to make her birthday a special celebration. I’ll bake a coconut cake, we’ll eat hot dogs with only mustard and drink champagne with strawberries in it – trying to do some very specific things that my mom enjoyed and texting photos back and forth with my siblings, my aunt, and my dad. You’re suggesting that I bring a bit of that to May and June?

Jim: Yes, embrace it, embrace June! You hit on something intuitively that's really important, which is that people think of anniversaries as the day that somebody died, but anniversaries are Christmases and Thanksgivings and birthdays and weddings and all of those other times when somebody wasn't there anymore to help celebrate.

Nick: My own birthday has gotten very hard to celebrate. My mom’s just as much a part of that day as I am and her absence each year is palpable. In fact, without realizing it, I’ve begun treating my birthday like my mom’s death-anniversary – downplay it, ignore it, hope that this year maybe everyone will just forget about it. It’s not fun.

Waheeda: I think both of you hit on something so important. It's not just the loss of the person, right? It's the loss of all the would-have-been's, could-have-been's, should-have-been's. When a loved one dies, we lose our physical relationship with them, but we don't end our emotional or spiritual connections to them. It’s up to us to decide how we want to maintain that part of our relationship with them, because that relationship part, that connection never ends. And that meaning-making where Jim started this conversation, that's the essence of it, I think that's sort of the bigger human question.

Nick: I love this whole idea. Part of my worldview has always been, death is final and that’s just it. My mom’s dead, so no further relationship. I’ve been neglecting all those non-physical ties to her that never really went away, all those pieces of our relationship that are part of me.

Jim: Especially when it’s a parent, it’s who you are, right? Your mother’s still living in you.

Nick: Right, but I’ve been so preoccupied with the fact that she’s gone, I haven’t been remembering the parts of her that are still there.

Jim: Any little thing you can do to help build meaning from those memories, having a little ritual. You could show your kids pictures of you and your mom when you were their age, so that they know her. They’ve been robbed of their grandmother, right?

Nick: That’s something I think about all the time, every holiday, every anniversary. This is a moment where their grandmother would be with them and she’s not.

Jim: Yeah, you can be pissed, too, right? You know, your kids don’t have their grandma. That’s a pretty normal reaction, too.

Nick: Exactly! With my kids, I try to talk about my mom whenever I can. Often they’ll ask, “Tell us a story about Grandma!” I’ll try to pull something up...and now that we’re having this conversation, I realize I should really dig into those moments. But outside of that, I struggle with the balance of how do I talk about her, how do I reference a story about her without feeling like I'm just dropping a bomb on any conversation that I'm having – I'd rather spare everybody by just not mentioning her at all.

Waheeda: Part of me wants to be like, screw other people's feelings. You should be able talk about your mom whenever you want to and it's not fair to have to caretake other people's feelings. This is a particularly American or Western thing, where we get very uncomfortable talking about death and dying or talking about people who have died. That's not your problem, that's their problem, so you do what you gotta do and let them deal with it. People die, parents died – you should be able to mention your mom.

Nick: Wow, well said!  Waheeda, Jim, thank you both so much!

After our discussion, Jim followed up with a text: “Great conversation today. Thank you both. I think one question I would ask you, Nick: what have you learned about yourself through this experience?”

I’ve been batting that question around in my head ever since. Here’s what it all boils down to: I wish I’d had this conversation before this year’s anniversary. It’s time for me to make a change in how I think about and how I care for myself on the anniversary of my mom’s death. I’m leaning into this conversation. What I’ve done till now has worked and that’s OK. Now it’s not working, and that’s OK, too. My grief does not need to remain static. I can grieve however the hell I need to grieve. 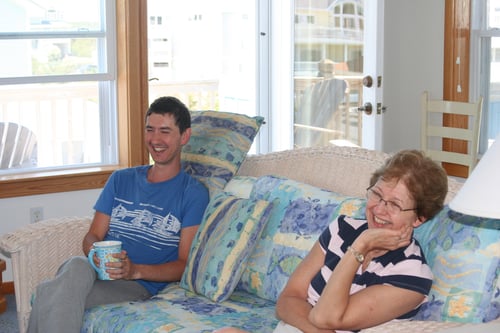 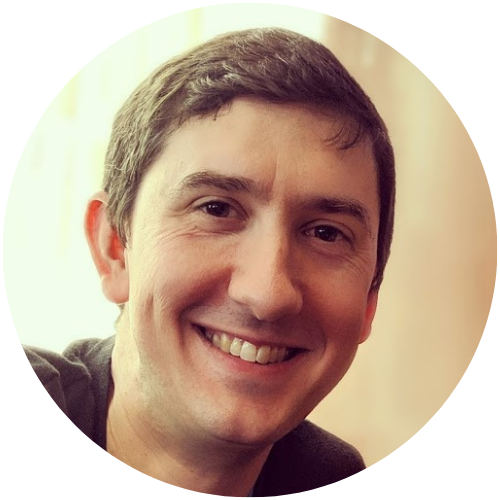